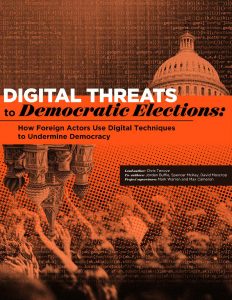 Our democracy is under digital attack. That concern is now raised before and after every major election. Newspaper headlines and social media feeds are full of stories of hacked documents, foreign troll networks, and bot-driven misinformation campaigns. Foreign actors, from states to extremist social movements, use these digital techniques to influence or undermine democratic processes. This issue has raised serious concerns among policymakers and citizens, but it is hard to get a grasp on what these digital threats are, how they work, and what might be done about them.

To address those questions, the Centre for the Study of Democratic Institutions is publishing an assessment of research on the topic: Digital Threats to Democratic Elections: How Foreign Actors Use Digital Techniques to Undermine Democracy. The report was written by researchers in UBC’s Department of Political Science, and our work was funded by a Knowledge Synthesis Grant from the Social Sciences and Humanities Research Council.

Drawing on research by academics, think tanks and journalists, we make the following observations:

However, it’s clear that these digital techniques may affect some groups more than others, such as the troll networks that target women and minority groups with threatening and stigmatizing messages.

But foreign actors are not alone in using these digital techniques. Domestic actors use similar techniques, and act as de facto “partners” to amplify the interference by foreign actors.

Foreign digital interference may contribute to vicious circles for democracy in Canada and other countries. Digital techniques can undermine democracy, such as by exacerbating social cleavages and weakening political institutions, and this in turn makes countries more vulnerable to future interference. If such vicious circles continue, democracy will decline.

Policymakers, citizens, and researchers therefore need to take serious, timely, evidence-based action. We need to address digital interference as part of the larger project of making our democratic systems more resilient and responsive to citizens.

Heidi Tworek, “Responsible Reporting in an Age of Irresponsible Information.” Alliance for Securing Democracy. The German Marshall Fund of the United States. Policy Brief No. 009. 2018.

Chris Tenove and Heidi Tworek, “What Europe can teach Canada about protecting democracy“. The Conversation. April 5, 2018.