Centre for the Study of Democratic Institutions
» Home » 2020 » September » 14 » Democratic Health Communications during Covid-19: A RAPID Response
News
Past Events

Scroll down or follow these links for more information on the report in the media & the report’s authors and researchers. 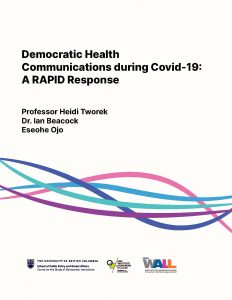 This report recommends how to put health communications at the heart of democracies’ response to Covid-19. Communications are an effective non-pharmaceutical intervention (NPI) for Covid-19; other NPIs include travel restrictions, physical distancing, or personal protective equipment—each of which, in turn, requires clear, rapid communications. More effective communications could save lives.

Effective communications are essential in the short-term for uptake of public health measures like face coverings. But they matter more over a longer time horizon, whether to forestall compliance fatigue, lay the groundwork for vaccine uptake, or encourage the public to engage proactively with the healthcare system for concerns unrelated to Covid. They also matter for cultivating trust among citizens and their governments—trust that is critical for the future stability of democratic institutions.

If communications are a health intervention, democratic communications can be a civic intervention. Many democracies were already struggling with distrust before the pandemic: anti-vaccination activism, conspiracy theories, sinking faith in institutions, populism, rising inequality, the erosion of local journalism, and so on. This rolling democratic crisis is now interacting with the pandemic. Our report lays out a framework for how to communicate—even or especially during a public health emergency—in ways that strengthen democratic norms and processes rather than undermining them.

We draw our recommendations from in-depth studies of nine jurisdictions and two provinces on five continents: Senegal, South Korea, Taiwan, Germany, Norway, Sweden, Denmark, New Zealand, and Canada (for which we also studied two provinces, British Columbia and Ontario). Each of these cases managed relatively effective responses on their own terms; each of them also took democratic communications seriously. Where appropriate, we compare with democracies that struggled to communicate around Covid-19, particularly the United Kingdom and the United States.

This report proposes five broad principles that can underpin any democratic public health communications strategy. Our principles draw upon research from a range of disciplines, including political science, social epidemiology and public health, behavioural science, sociology, media and communications studies, history, and political theory. We call them the RAPID principles, because rapidity is an essential element of an effective response: 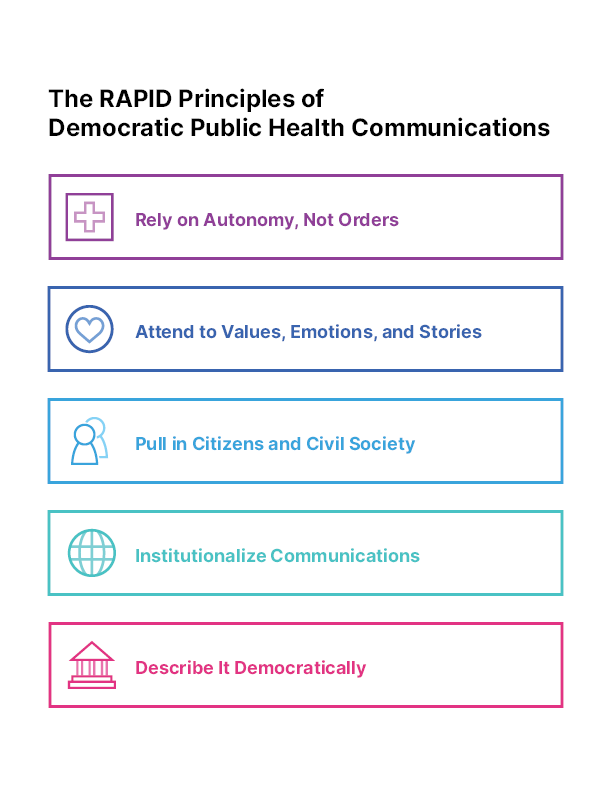 Rely on Autonomy, Not Orders
Pandemic responses should emphasize autonomy where possible, in alignment with national traditions and local political cultures, supported by thoughtful and clear communications. We identify two particularly salient forms of autonomy: personal and institutional. This means developing and repeatedly communicating a set of universal principles for making responsible and safe decisions during a pandemic. Autonomy is not anarchy, but rather a policy that includes stakeholders, assumes good faith, and reinforces democratic self-understanding.

Attend to Emotions, Values, and Stories
To complement autonomy, the most effective democratic health communications sustain and build community by incorporating societal values, emotions, and stories. Facts alone are insufficient. Emotions, shared values, and narratives build trust and make health information reliable. There is no single best practice for how to do the work of values-framing, or who should be responsible. What is important, however, is that someone repeatedly and carefully communicates how pandemic measures relate to existing social and political values. Effective communicators considered the diversity of the population and found strategies that avoided stigmatization; they relied on pro-social hygiene and behavioural messaging; they articulated positive emotions like gratitude and acknowledged mental health struggles; they sought to build rapport with citizens.

Pull in Citizens and Civil Society
While officials play an essential role, citizen participation and civil society are also essential. Too often, public health engagement occurs based on what officials think the public looks like, rather than trying to understand citizens as many overlapping groups of individuals with different ideas, beliefs, or capacities. It is essential to establishing feedback loops through techniques like surveys or text mining to understand a population’s diverse experiences, their feelings about the response, and their needs from government. Officials should also consider finding trusted local validators to share health information with friends, families, and followers (e.g. young people, social media influencers, celebrities, religious leaders). Encouraging participation and collaboration, especially on issues like public health, also reduces burdens on public-sector actors. Collaborating with citizens and civil society may create a more robust response; in turn, listening and responding to citizens’ concerns strengthens democratic values such as solidarity and collective responsibility.

Institutionalize Communications
A rapid response, paradoxically, requires structures built far in advance. Countries without communications units have sometimes struggled to deliver consistent information over time or to update citizens swiftly on how pandemic guidelines are changing. On the other hand, jurisdictions with institutional strategies for pandemic communications had the capacity to produce differentiated government messaging that embraced openness and transparency. An institution enables a swift response. A pandemic communications unit could also lay the groundwork for communicating quickly during future epidemics, follow the latest research on effective communications, and establish liaisons with large social media companies to combat misinformation. Finally, a specific unit indicates that communications are seen as an integral part of public health rather than ancillary.

Describe It Democratically
The most obvious way to keep democracies healthy during an emergency is to maintain the business of institutions like parliaments. But if democracy is not reducible to formal institutions, neither are effective democratic health communications. Communicators should describe the pandemic response democratically. This means avoiding militaristic metaphors that are hierarchical and limit space for agency. Instead, pandemic messaging should rely on more democratically-aligned metaphors. Just as citizens need repeated messaging on handwashing or physical distancing, they need repeated messaging on compassion or their democratic duties during times of emergency. Framing the Covid-19 response as a democratic challenge matters not only for the present; it could shape how citizens will remember it in the future. Like institutionalization, democratic framing better prepares us for the next pandemic even as it gives citizens new tools for addressing this one.

The five principles for effective democratic health communications in this report are a toolbox for sustaining democratic trust, practice, and self-understanding in an age of great uncertainty. They enable policymakers to recognize and frame this crisis not only as a threat to democracy—but as an opportunity for citizens to feel more trust than they did before, more resilient than they did before, and more sovereign than they did before Covid-19 emerged. It’s important that policymakers, elected officials, and citizens alike recognize the importance of clear, consistent, compassionate, and contextual communications during a time of crisis. Public health depends on it. The health of democracy does, too.

This report is brought to you by:

Dr. Heidi Tworek is Associate Professor of History and Public Policy at the University of British Columbia, Vancouver. She is a non-resident fellow at the German Marshall Fund of the United States and the Canadian Global Affairs Institute. She is the author or co-editor of three books as well as over 30 journal articles and book chapters. Her latest book is the prizewinning News from Germany: The Competition to Control World Communications, 1900-1945 (Harvard University Press, 2019). Her current work examines the history and policy around health communications. She has testified before and advised governments around the world on social media, hate speech, and disinformation. Alongside regular appearances on radio and TV, her writing in English and German has appeared in media outlets including The Atlantic, Foreign Affairs, Washington Post, Columbia Journalism Review, The Independent, and Süddeutsche Zeitung. She is a contributing editor to the Brookings Institution TechStream.

Dr. Ian Beacock is a prizewinning historian and journalist. He holds a PhD in History from Stanford University, where he specialized in modern Europe, modern Germany, and the history of democracy. His work has been supported by major research fellowships from the Stanford Humanities Center, the German Historical Institute in Washington, DC, the Hoover Institution Library and Archives, the Europe Center at Stanford University, and elsewhere. His reporting and analysis on contemporary politics, as well as his criticism, has appeared in publications including The New Republic, The Atlantic, Aeon, and The Walrus. He is currently working on a book about democratic feelings in modern history.

Eseohe Ojo holds a BSc in International Relations from Lead City University, Nigeria and a Master of Public Policy and Global Affairs (MPPGA) from the University of British Columbia where she studied as an African Leader of Tomorrow (ALT) Scholar and a R. Howard Webster Foundation Fellow. Her work focuses on policy, advocacy and communications around gender, youth inclusion, and human rights, particularly freedom of expression, access to information, digital rights and Internet freedoms. She also works on civic engagement, transparency and other good governance issues globally and on the African continent. Her most recent publication is “Redefining Policy and Practice: Unraveling Definitions of Sexual Violence Through a Survivor Centered Approach,” a report on the impact, limitations, and approaches to improving current definitions of sexual violence.

Sudha David-Wilp is a Senior Transatlantic Fellow and Deputy Director of the Berlin Office of the German Marshall Fund of the United States.

Victoria Ker is pursuing her Master of Public Policy and Global Affairs (MPPGA) at the University of British Columbia, Vancouver. She holds a BSc in Microbiology and Pacific and Asian Studies from the University of Victoria.

Yoojung Lee is a BA student majoring in International Relations and minoring in Law and Society at the University of British Columbia, Vancouver.

David Metzger is a student assistant at the Berlin office of the German Marshall Fund of the United States and is currently pursuing a Master’s degree in International Relations at the joint study program of Freie Universität Berlin, Humboldt-Universität zu Berlin and Universität Potsdam.

Sean Wu holds a Master of Public Policy and Global Affairs (MPPGA) and a BA in History and Political Science from the University of British Columbia, Vancouver. His research interests include policy communications, the digitization of government, and digital diplomacy.